Little League Baseball came to Oswego in 1956. Enthusiasts for the new league was so high that more than 500 boys tried out for just 120 positions.

Opening night was preceded by an elaborate parade and ceremony as all eight teams participated and thousands of spectators looked on. Though it did not rain on Little League's parade, the inaugural contest between Local 359 and Elks was washed out after two scoreless innings.

The original eight teams were divided into two divisions, American (East side) and National (West side). The National League consisted of Elks, Knights of Columbus K of C), Local 359 and Huron Cement. Comprising the American League was Oswego Speedway, Kingsford's Pumps, the Police and Firemen. The competition in 1956 was solely at the city level as Little League prohibited first-year leagues from participating in state and national tournaments.

The action at Little League Stadium in Fort Ontario drew large crowds for the duration of the season as each team played 18 regular season games before the play-offs. Oswego Speedway's Larry Pidgeon hit the first home run in the league's history only innings after being robbed at the right field wall by Fireman outfielder Wayne Verney. Pidgeon starred both with the bat and on the mound in leading the Oswego Speedway squad to the City Championship.

The playoffs pitted the two top teams in each division in a best-of-three series with the winners advancing to the championship series. In the National League final, K of C outlasted the heavily favored Elks Club two games to one.

Meanwhile, Speedway blew past Kingsford's in two straight. Game one of the city finals went to Speedway, 3-0 behind Pidgeon's one-hit shutout. K of C returned the favor in game two as Bill Cloonan went the distance and shut out the high-octane Speedway lineup by the same 3-0 score. That set the stage for the deciding game three. Unfortunately for the Knights, the outcome was never in question as Speedway raced out to an early lead and coasted to a 12-2 victory behind Randy Pelow's two-hitter.

Despite the overwhelming success of Little League's initial campaign in the Oswego community, the sports editors at the Palladium Times were undoubtedly correct when they advised that one thing that " should be kept in mind for the future... is that a single league and a single park is not enough to meet the demand that was evidenced by the more than 500 boys who applied for positions on the eight teams." 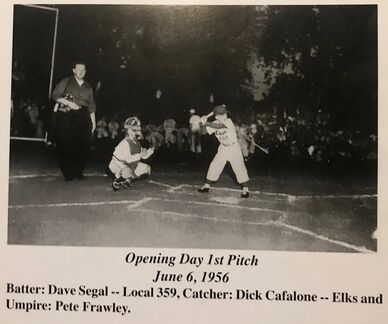 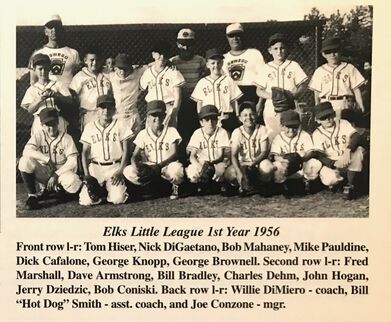 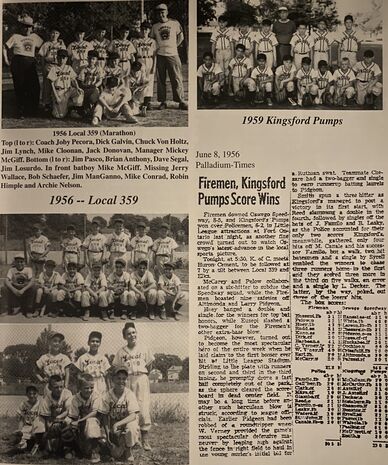